What is ASGI and why do we need it?

What are the limitations of WSGI?

At the time when WSGI was in the process of development, the only concern designers had was to make a protocol which provides a common ground for web development, such that, users can easily switch between many web frameworks without worrying about the details of how the new framework interacts with the server. And actually WSGI did a pretty good job in dealing with these issues appropriately, but when the relatively new protocols other than standard HTTP (HyperText Transfer Protocol) especially WebSocket started gaining popularity within the web developers community, WSGI failed to provide a way to develop applications which can handle these protocols. 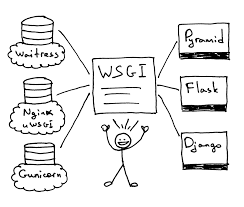 As the WSGI applications can only take requests from the server and return responses to the client/server, WSGI is inherently suited for handling HTTP protocol only.

WSGI applications are single, synchronous callable that takes a request as an input and returns a response due to which:

How does ASGI handle these limitations?

Like WSGI, the server hosts and runs the application inside it, and passes incoming requests to the application in a standardized format. Unlike WSGI, however, applications are objects that accept events instead of simple callables, and must run as coroutines which are capable of handling asynchronous I/O operations (on the main thread; they can also use threading for this to maintain synchronous code).

Unlike WSGI, there are 2 different parts of a connection:

Applications are instantiated by passing a connection scope, and then application is run in an event loop where they handle events and send data back to the client as events.

There is a mapping of a single incoming socket/connection to an application instance that lasts the lifetime of that connection or maybe  a little longer if there is some cleanup that needs to be done.

ASGI application is a single, asynchronous callable. It accepts scope, which contains the information about the incoming request, send, an awaitable that lets you send events to the client, and receive, an awaitable which lets you receive events from the client.

A very simple ASGI application can be defined as following:

These events always have a defined type  root level key, which can be useful in deducing the event’s structure. The sample event for sending the start of a HTTP response that you may receive from receive:

And the event you might pass to send to send an outgoing WebSocket message may look like following:

As the typical structure of WSGI Application looks like following:

Where application is a WSGI application which accepts 2 parameters environ which contains the information about the incoming requests and start_response is the callable using which application returns the HTTP header.

To make ASGI backward compatible with the WSGI applications, We need to make ASGI able to run WSGI synchronous applications inside the asynchronous coroutine, also ASGI gets incoming request information through scope, whereas WSGI accepts environ. So we need to map environ to scope.

Synchronous WSGI applications must be run inside the threadpool so that they can be served, but otherwise their runtime maps onto the HTTP connection scope’s lifetime.

The WSGI’s environ variable is almost map to the ASGI http scope:

Similarly, The start_response callable can also be mapped to http.response.start.